Dan’s obviously been feeling his 14bikeco road bike, “rain put a damper on the 70 miler – did a solo 30 instead – really lovely ride” – glad to hear it mate, and the bike looks great! See the rest of the photos in the flickr set

Many thanks to Maria and Roman for sending in these photos of themselves repping 14bikeco to the max and enjoying their bicycles over in Moscow! 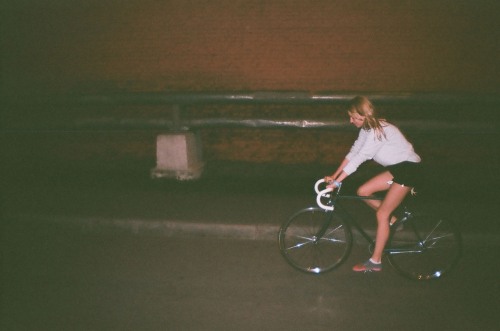 14bikeco is proud to announce the CUSTOM14 Fixed Gear Configurator, an online 14bikeco bicycle generator. We’ve been working on this for a while with the idea being to make it really easy for customers to plan and put together their own custom 14bikeco from the comfort of their own internets, with a running tally for costs to they can see exactly what they’d be paying and what they’d getting. In an ideal world we would have finished this and had it all up and running already, but there are so many really important projects that we’ve had to push that this has been slightly delayed, and as you can see it’s still in the BETA stage, there are faults. For example, there aren’t all of our frames and parts available, the pricing isn’t ready so we’ve removed it for now, and the compatibility between parts is a little off (oversize bars and bmx stems and that sort of thing) but even as it is, CUSTOM14 BETA is a unique and fun tool which should help people get a better idea of what their dream bike might be like. Because we basically don’t have the time to fix all of the smaller bugs and issues with the BETA application right now, we’ve decided that instead of holding onto it for any longer until we have time to fix it, the CUSTOM14 BETA is now available to the public. This is of course free and available for people to use, and can be found at http://custom.14bikeco.com/ or by going to the CUSTOM14 Bike Generator page (I’ll make it in a minute). Hopefully we will have a fully functional version available really soon, but for the time being you can enjoy this BETA version, get creative and have fun! 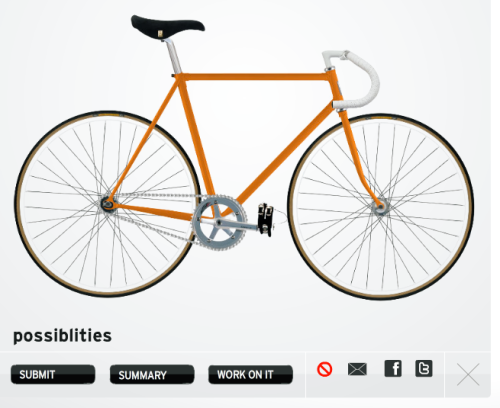 P.S. for some laughs hit the ‘Random Bike’ – some real genius comes out of there

I took these a short while after Jordan got his new ESB, and I’ve only just sorted through the photos now, super stealthy. Check it in action in Jordan’s recent edit for MIXTMEAT

Posted in around the shop, customers + bikes

nick putting in the work with his mission workshop

‘Working well. Just used it to pick up my new 15″, tablet and printer. Couldn’t have got home without it.’ The photo is quality, it’s amazing how much you can fit into those Mission Workshop bags. cheers for sending it in!

I dig the darker Brooks leather saddles and tape and this blue goes really nicely, a pretty balanced build.

Sometimes it’s the simple builds that are most effective, I’m not sure I’ve seen a headtube configuration that looks better than polish and matte black. so clean

Posted in around the shop, customers + bikes

When I first saw this frame hanging in the shop I was like damn, I never new brown and white would go so well together. He’s kindly taken some photos that he’s uploaded to flickr for us, cheers dude!

Tom AKA TomEats sent over a little picture of his 14bikeco all the way out in Hong Kong Harbour looking gawwgus, thanks dude! Gets us stoked at 14 to see our babies all out in the world – send me a postcard darling

A couple of new ESBs around the shop

So it’s all very exciting we’re just getting the first batch of the new production model tig welded ESBs out of the shop and around the globe for some of those who have preordered and they’re looking sweet! Thanks to Aidan for the photos (I’ll try and make it into the shop tomorrow)

Posted in around the shop, customers + bikes, product

14bikeco's Blog
Create a free website or blog at WordPress.com.